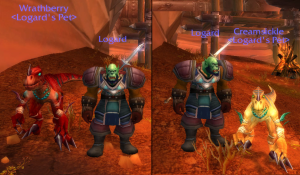 That’s Logard, the “Raptor King.”  Well, it’s hard to be a king at level 35 but he is on his way.  I remember rolling him with a bunch of WoW Ladies members during Wrath and I knew I wanted Creamsickle as his first pet.  Then he snagged a couple of the hatchling pets and I got the idea of what he would be.  As you can see, he also has the Troll Tabard to ensure his mount collection as well.

I bring him up today as he garnered a couple of levels yesterday, continuing my week of Hunter love.  Liouxpold got to 80, and his two immediate goals are a belt from the Black Knight (try hitting LFD for any specific Heroic Wrath dungeon and see what the wait is like) for a new transmog outfit, and also the Cenarion Expedition rep for the Hippogryph (I get tired of Coilfang).

As I mentioned, Logard got his levels in between housework yesterday.  It’s not much, but these days every little bit counts.  I also took some time to give his Leatherworking and Enchanting a little boost as they were atrocious at best.

Oddfodder rounded out my Hunter activity for the week.  As you can see by the banner, his Engineering is high enough to make the Flying Tiger Goggles.  He’s sitting at level 15 now, but 20 is on my radar as that’s the level I need to tame the pet I want for him.

Hrm, I just realized my poor Dwarf Keylgard hasn’t been touched though.  *ahem* Excuse me, I have to go log in for a few minutes…