As I set down for today’s Top 5, I looked back through previous topics to see what all I’ve covered and I came to realize I didn’t actually finish all of the weapons.  With that in mind, it’s time to begin the process of correcting that as we look at Bows today.

There’s a simple elegance about this bow that just draws your eyes to it. It could be the feathers or possibly the blue/purple hue about it, but the fact is there’s a natural beauty to it. It looks good with nearly every race as well. Did I mention it’s the same skin as Tyrande’s bow? Indeed, the weapon has much going for it and if it’s your fancy, then you’ll need to complete the quests in the Well of Eternity, namely the last one Path to the Dragon Soul.  Upon completion you can choose Ironfeather as your reward. 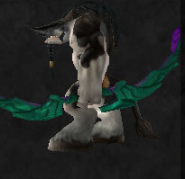 Once again, my personal favourite fails to rank number one. Just goes to show you I’m not biased. The colour combination, plus unique design, makes this my favourite bow to wield on a Hunter. Again, it’s just one of those designs that simply stands out. The Valanos’ version is often on the Auction House (if you don’t mind paying 100g-200g for it), while the Starbolt drops from Pandemonius in Heroic Mana Tombs.

3. Sunfury Bow of the Phoenix

This is a favourite among Hunters these days, and was “back in the day.” It was one of the better non-Beast Mastery weapons at the time, to say nothing of how amazing it looks. The sad thing is, despite how much I’ve Karazhan over the years I have still only ever seen it drop once (and I’m happy to say my wife still has it in her bank). If you want it for your Transmog, start farming Prince Malchezaar and may the RNG be kind.

2. Black Bow of the Betrayer 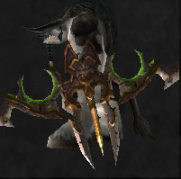 Let’s face it, most things associated with Illidan automatically rank higher. However, that’s a mere coincidence this time as the Black Bow is on the list and as high as it is because it looks that good. The scale, the design, and the slight animation to it just make it a great looking weapon. The only mild knock against it is that it does come across as a bit big. Still, you can do far worse for your bow and if you want this one then it’s off to kill Illidan in Black Temple.

1. Arathar, the Eye of Flame 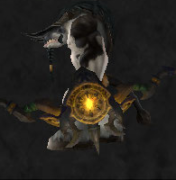 It isn’t often that I rank a Cataclysm item atop the list, so there’s obviously something to be said when I do. That’s precisely the case with the Eye of Flame. Also, let’s be precise here as I’m referring to the regular one (as seen in the picture), and not the other skin that drops from Heroic (as seen here). Quite honestly, the Heroic version just blends in too much with other gear. The regular Arathar stands out with it’s yellow skin and (as a result) greater vibrance.

As is usually the case, the list is always subject to opinion.  There were a couple of other bows that I considered for the list but they tended to be a great skin for one or two races, but not as universally and as such didn’t make the list.  Having said that, I’d love to hear your opinion as always.