Given the previous week, and this time of year, I wasn’t sure what to make of the planned raid heading into it. Apparently that was all for not, as we had a great turnout, as you can see by the above picture! With such a stellar group, it should come as no surprise that the chess event probably took longer than the rest of the run. It was nice that we had the Wizard of Oz event in the opera, but unfortunately for the cloth Moggers in the party, there was no hat to be found. Saintvache picked up the Shield of Impenetrable Darkness courtesy of Nightbane, though. I foresee an upgrade to his look coming.

All in all, there was actually a lot of great loot dropping, including a Tailoring pattern that Navimie won. Can’t recall it at the moment, but it was a Cloak and one I’d never even heard of. After that, a couple of Repgrind‘s guildmates joined us for Gruul’s Lair (congrats to the one who got the achievement as well!) and I picked up two more Tier pieces. I didn’t see if Kamalia got her shoulders, but I know she was hoping. It was at this point the group wanted to continue on to Magtheridon’s Lair, but Navi had to call it quits and looking at the clock I realized it best that I do the same.

To the best of my knowledge the rest stayed together and carried on. For me, though, there was a special moment. When we were all gathered inside the gate I suggested the obligatory picture (seen above) next to the caretaker. We notoriously wait until the end of the raid usually, and then a few people are gone by that time so I thought it wise to get the picture first this time. Setting up my screen for the shot was when it hit me that this was where it all started. 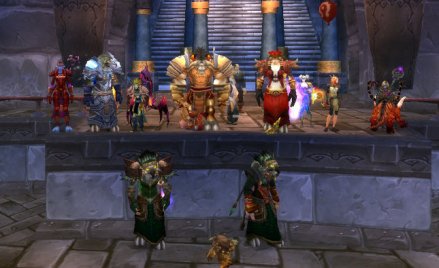 Way back in April, when I was set to retire, we ran Karazhan first and did so with Horde toons. I wanted to take Saintvache because it’s truly my favourite instance in the game. I think I accurately summed up what happened that night, and here we are some three months later.  While a few people have faded from that night there have been a tonne more that have joined in. As I think back on the days leading up to that night, and the evening itself, this is about the last thing I would have expected. Yet, here we are. Folks who, like yours truly, love nothing more than kicking back and visiting the old content once a week – together. On occasion it can still be tough. On occasion it’s pure zerg (funny enough, that seems to be when Coolidge is along). But it’s always relaxed and enjoyable. Someone told me this morning they’re glad I didn’t call it quits that night. Every week I’m reminded why I’m glad I didn’t either.