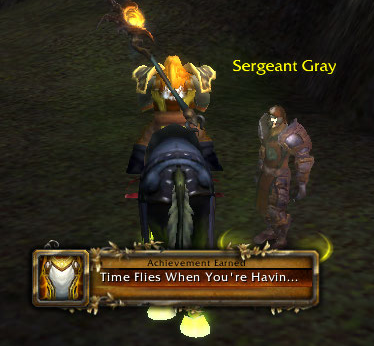 If you’re reading this, you’re certainly among a select few at this point.  It’s as though something has pulled almost everyone away from blogging for some odd reason.  All kidding aside, the blog has taken a hit in views over the past 12 hours as everyone digests the new hotness in Azeroth.  As you can see in the picture, I started the day off (WAY TOO EARLY) grinding out the last bit of rep that Tumunzahar needed to be Exalted with the guild.

This was actually after I wanted to level Jewelcrafting.  Turns out you need the expansion to go from 525-600.  Stands to reason.  Though getting the gold for my JC panther will take more care on my part.  More flipping and relying on others it would seem.  But, in going for the guild rep this morning, I was pleasantly surprised to see that the cooking tokens were now merged (and yet, Jewelcrafting still gets shanked).  That will make getting the missing Dalaran recipes much faster.

I also began the process of evaluating Team Amateur.  What that basically means is going through, character by character and performing the following checklist:

It probably sounds silly to ask the question twice, but after evaluating that information it’s good to reconsider the idea.  It’s also odd to see what I have in some of these banks.  Now granted, I always advocate doing this type of thing before an expansion but as I am not partaking in said expansion…well, now seems as good a time as any.  So far Mortevache and Kinahta (Kirin Tor) are gone, but the latter was re-rolled some time ago on Blade’s Edge.  At least three more toons will be deleted and I think I’m going to move my 57 Warrior to another server.  More than anything, I want to get certain things to my Horde toons, such as Heirlooms (and yes, gold and transmog items).

Pet Battles.  Son of a bitch are they fun!  I mean, I kind of thought they would be.  I didn’t think I would be as into them as I am.  No, really.  Check the evidence:

I believe at this point I am 16-3.  I’ve seen some people say they’re hard.  Perhaps it’s because I’ve been using the Spirit of Competition, but the only time I come close to losing is if I take on a level equivalent creature and forget to heal him up first.  Like I said, it’s fun.  I just need to figure out how to profit off of it.  I’ve certainly figured out ways to get some of the pets dirt cheap (seriously, I snagged a Red Dragonhawk Hatchling for a silver and Tome managed to get Willy for 11g).

Another pleasant surprise this morning was Draynee tipping me off that Pandas are available to anyone and everyone.  Mists or not.  Apparently the story goes, Blizzard didn’t want people inviting their friends to play WoW and those people getting irked at not being able to roll a Panda off the hop (this happened a fair bit in Cataclysm).  So I can make Pandas.  I hadn’t planned on making a Panda.  I hadn’t wanted to make a Panda.  Damnit…I’m making a Panda.