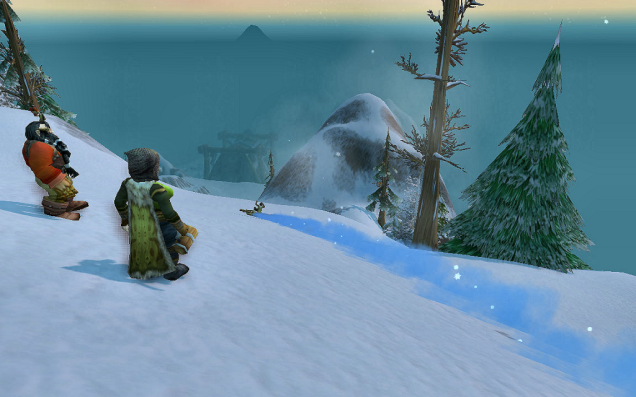 Ah, the tobogganing outside of Ironforge.  One of those little secrets most people never even stumble upon.  The reason I chose this shot for the theme of childhood was because not only did I do it a lot as a wee Amateur, but it’s also one of my earliest memories.  I don’t think I was even in school yet and we were out one night at the park on one of those stupid red saucers they called a “sled.”  That’s right, a round circle that you have spots for your hands but absolutely no means of controlling.  Can you see where this is going?
So I remember to this day my mother saying “we’ll try to avoid the trees on this one.”  I have no idea if the previous venture down the hill was a near impact situation, or what.  What I do remember, is the run that was supposed to miss the trees did not.  I slammed into that thing full tilt and bust my forehead open but good.  Heck, I remember the blood in the van as we went to the hospital.  Short story long, it wasn’t until the last few years that the scar started to fade.  But if you look, you can still see it.
I know, it’s not the most chipper thing to relate to you.  But to be honest, I laugh about it now and even tease my mom on occasion.  But it never stopped me from getting back on a sled, snowboard, GT-racer, or crazy carpet and flying down that lush white hill over and over again.