I know I have been rather quiet as of late. In fact, even my gold making series died faster than it started. In large, that was due to a busy second half of September. I’ll admit disappointment simply because I would have loved to see how I actually ended up. But, alas, it was not to be. Instead I’ll know that I can easily make the money to continue playing (so long as the darn tokens don’t continue to rise in price!). 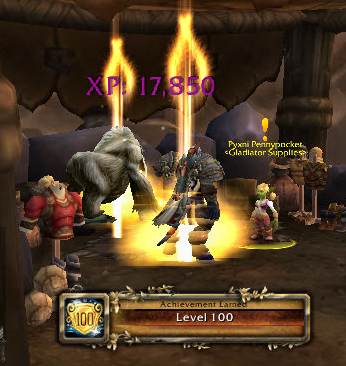 As you can see, I haven’t been idle in what time I have had. Liouxpold is the second member of the Army to hit 100, and first among the Alliance. While he’s never been one of my front of the line toons, I remember thinking all along that he should be the one to do so for Draenor. So that’s the case. Tum and Siori are in Draenor with him, but how fast they level is hard to say. Liouxpold has spent his early days at level cap hanging out with a Cat friend. But more on that later.

7 thoughts on “Then There Were Two (Hundred)”