Hard to believe it’s already the end of March.  It really flew by.  At the start, of course, I put together a small list of things I wanted to try to accomplish.  For what it’s worth, after two weeks I looked like I was going to blow through things with the greatest of ease.  I had no problem getting Paramita to 45, or a Pandarian level for Liouxpold (he’s now 86).  Even Semblance.  I wanted to get her to 35 and ended up with a level 40 Warrior.  My successful attempt at cleaning up the Claws of Nature Guild Bank is also well documented.  Unfortunately, that’s where my accomplishments end.  Sure, I did get other things done unexpectedly, but not the other items on the list.

A couple of those I might’ve come closer to completing if not for coming down with something this past weekend.  All three of us in the Amateur household are suffering from it, though I think Mrs. Amateur has it the worst.  But the key is focusing on the things that did get done and moving forward and building upon.  So a quick to do list for April and then a little blogging exercise.

We’ll see how things go this time around.  I already know a good chunk of the coming weekend is a write off, so I expect to be a touch behind the 8-ball.  Either way the important thing will be to once again focus on what I do manage to accomplish.

So now the blogging exercise.  I really don’t know where Mrs. Amateur found this, but it’s one I can definitely handle doing.  It’s another 30 days type of exercise, but the questions (to me) are pretty straight forward with good odds of being easy to answer.  How much elaboration comes with the answer is entirely up to the writer.  I know AmerPriest plans on doing it as well, and I would love to know if anyone else decides they’re up for it.

See you in April! 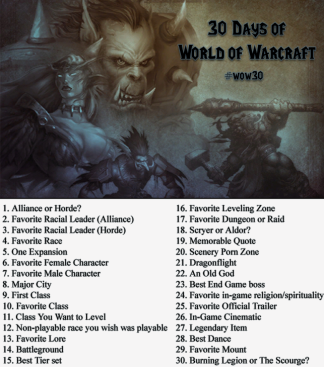 Cataclysm brought several new collectable pets, including Engineering’s Personal World Destroyer.  If your Engineering’s high enough, I recommend grabbing it and start production.  Not everyone has Engineering that high, if at all.  So, instead, let’s focus on three cash generating pets that can all be learned by 205.

The first is the Mechanical Squirrel.  Not only is the recipe (Engineering 75) easy to find on the Auction House, or possibly from a trash drop, but the mats are dirt cheap right now thanks to the influx of new characters and professions.  Essentially you need Linen Cloth, Copper Bars, and Malachite.   Really, Copper’s the only thing that might drive up your materials cost, but you should still be able to make a half dozen or more for about 10g.  You should then be able to sell each one for 5-12g.  Again, financial mileage may vary, but this is easy money.

The Pet Bombling and Lil’ Smoky are harder to obtain, as they’re both BoP.  Now, the Bombling is a guaranteed drop from Mekgineer Thermaplugg.  Smoky simply has a decent drop rate from several of the mobs in the instance.  The one thing to know from these pets, is that you need access to Fused Wiring.  It’s a 275 recipe, but there’s usually some on the Auction House at a value that won’t kill your profits on these guys.  Speaking of profits, they’ve provided their makes a flush of gold since Cataclysm thanks to the abundance of Mithril in the world.  Whether you farm it, or simply buy it for a decent price, it’s far easier than it was to get pre-Shattering.  These two pets are 75-125g for the most part and it will never cost you half that to make them.

So, let’s presume you’re on an average server with an average economy.  You make two of each a day.  Six pets, with an approximate return of more than 300g.  Pretty good, isn’t it?

Now, if you wish, you can increase your Engineering to 250 and learn the Tranquil Mechanical Yeti.  Just keep in mind you need to be level 55 to knock off the quest chain that grants the recipe.  That makes it far less appealing.

As for the Lifelike Mechanical Toad you can learn at 265, that’s a tough call.  For starters, the recipe itself is worth several thousand gold on certain servers because of sheer rarity.  Can you make money from making the pet?  Certainly.  Unless the Schematic falls in your hands, you’d have to decide whether it’s worth it.  Then again, even if it dropped for you I would put some thought into said decision.

As you can see, there’s a few pets at higher level Engineering that you can profit from, but the three low ones, even the lowest one, brings enough return that if you’re just in it for the money you simply don’t need to level any higher.

Recently over at WoW Ladies, someone asked what professions their bank alt should have.  Amidst gold making efforts and several bank toons I can honestly say it never occurred to me until that moment.  END_OF_DOCUMENT_TOKEN_TO_BE_REPLACED

One of the things I looked forward to most in Cataclysm was the remove of Specialization training for my Professions.  I specifically skipped choosing Armorsmith or Weaponsmith on my Death Knight because I knew it wasn’t going to matter for very long (though it did in turn make for a long or expensive climb through skill points).  Now, I have access to all Blacksmithing recipes.  Same goes for Tailoring and Leatherworking.  Not for Engineering.

Engineering is already a misunderstood profession.  For starters, it’s a tonne of fun.  My Shaman went Goblin, and it’s been a hoot.  But, fun factor aside, people don’t take Engineering because they think it’s expensive and that it yields little in return because most of the stuff you make you have to be an Engineer to use.  Whether that’s entirely true or not is for another day, because only having access to half the recipes for the profession doesn’t help entice players.

Now, Engineers aren’t the only ones who were left out in the cold on this decision.  Alchemists also must still choose between Potion Master and Transmute Master.  So while the gear making Tailors, Blacksmiths, and Leatherworkers can make whatever they want for whomever they want, Engineers and Alchemists are still stuck with one path or the other (or subsequently paying to switch).

I’ve found no explanation for why this is.  To be honest, I doubt I’d find one that satisfies me either.  It should be all or nothing.  Then again, weren’t orange recipes supposed to grant three points instead of one?  Why are my Scribes the only ones who have this happen?