When you play characters that can only die once, you tend to have some narrow escapes.  Popping out of cat form to heal myself and pop back in is almost second nature to me.  However, cat form isn’t much use in the taking back of Gilneas.  Or so I thought.

That’s right, my Worgen Druid died taking back the city.  I don’t even know how it happened.  Might’ve been a glitched Forsaken fighter for all I know, but the end result was pretty darn clear: 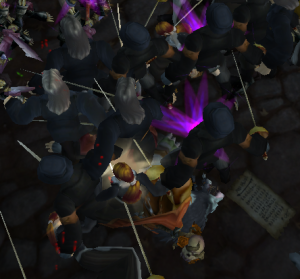 While I’m definitely disappointed to lose him, I take some comfort in the fact that I did far better than I had with Xelkirk.  Level 12 isn’t ooh and ahh, but it’s better than 7.  At least I got a spec and talent points.

I move on to character number five in the project, and once again back to the Horde.  This time, I’ve rolled my first female toon.  Meet Nasani, the Blood Elf Mage. 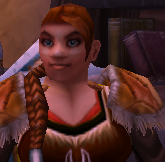 I honestly can’t believe I hadn’t posted in over three weeks.  That certainly wasn’t my intention upon announcing my return.  In truth, I’ve not played World of Warcraft as much as I might have liked.  With a little one in the house, it gets harder to keep one eye on Azeroth and one on him.

In the 26 days since you last heard from me, Egwydorian (pictured above) has gotten to level 25.  I’ve discovered in the Wetlands the old raptor nest area is now an archaelogical site, complete with living fossils.  A nice little change.  I continue to adjust to playing an Elemental Shaman after having Carrera in the Restoration tree.  Alas, she’s not seen any action in quite some time.

My Warrior Levache remains at level 10.  I finally got the urge to go crazy again with him, and discovered a giant wall where the road out of Thunder Bluff used to be.  It’s little things like that I am enjoying again.  Surprises, as it were.

As well, Clawmantle is now level 8 and in Stormglen.  This will be the third Worgen I’ve run through the start zone, so I know it well and I have managed to avoid any real near death experiences.  At least he has already passed Xelkrik’s point of expiration.

So yes, in the time I have I seem to be spending it puttering around on my lower level characters.  I did, early in the month, burn through Uldum on Siori.  I really enjoy that zone, and everything about it.  I believe she has just a few quests left to knock off in it.  She’s also getting close to 85 so the two might go hand in hand.

Today was supposed to be a comparison between the two newest racial start zones in the game, the Goblins and Worgen.  In order to meet that, I had to first finish the Goblin zone on Xelkrik.  As you can see, that’s not going to happen today.  He’s dead now, courtesy of the sailors on the Vengeance Wake while trying to retrieve some Precious Cargo.

So, character number two in my One Life To Live effort is also gone…even earlier than the first.  In true goblin fashion, I blame my pet crab.  He had a tendency to wander off while I would shoot something and thus create a scenario where I had to shoot many somethings.

So, my article comparing the two zones will wait for now.  My efforts begin anew.  It’s time to flip back to the Alliance side of things, and I’ve drawn a combination with interesting coincidences if you read Saturday’s post.  Indeed, I’ll be playing a Worgen Druid: 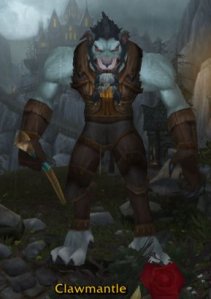 That’s correct, the first character in my One Life To Live adventures has bit the bullet as it were.  Actually, he was on the wrong end of a sword, and a second sword.  I was collecting some Linen Scraps for Sara Timberlain.  I took on bandits in Southern Elwynn Forest, along the river.  Things were going fine.  I saw a Warrior and Mage and charged the Mage.  He went down fast and I was still in decent shape against the Warrior, until one on patrol joined the fracas.  I took down the first Warrior and thought I was in good shape until my Victory Rush missed and Bloodthirst did as well.  Moments later I was staring blankly at the screen.

I’ll admit, I did mourn him a bit.  Despite my loathing of the Human race, and the tediousness of another lowbie Warrior, I gave him my all and he was the very first candidate of this project.  I was actually starting to become intrigued about what the Fury spec was going to be like to play.

Alas, out with the old and in with the new.  For contestant #2, it’s over to the other side of the faction fight.  As random luck would have it, I go from a race I don’t like to the only one I haven’t played.  Meet my Goblin Hunter:

This past week wasn’t all that kind in supplying me with time for WoW.  Out of my six goals I set out, I achieved half.  I rolled my Worgen Warrior and got him to level 10…but then deleted him to start over.  I need to redo the start zone to get some details that I missed.  I also got the One Life To Live project underway, and Golstaff has just arrived in Goldshire to start that quest hub.  Yes, I’ve already nearly died.  The other met goal was Tum getting his Flight Master License and maxed mining.

I’m hoping to get a little play time in tonight, as the next two days don’t look promising and a good chunk of the weekend will be a write-off as well.  A guildmate had wanted to get the some of the old instance achievements for the guild, but it looks like she’ll be doing so without me or my wife.  I certainly appreciate her putting it together and doing that for us, and really do wish I could have been in on it.  So, what will I accomplish this week?  Or try to?

I’ve done some spending since Cataclysm came out, without even getting the 310 flying for any of my toons.  I will say, for Tumunzahar at least, it’s got some appeal.  However, I’ve promised myself I won’t be buying it for anyone until my gold balance reaches a certain figure once again.

I officially got the One Life To Live project off the ground today.  As you know, I was waiting for the two new races this week before delving in.  The idea will be to get characters as far as I can without dying.  I’ll do a different race each time, and try to do a different class each time as well, until both start repeating.  With all the options available, it will literally be dozens of characters before I repeat a combination.

I stated last week I had put a great deal of thought into the project and that was true, but as one would expect a bit more thought went into things as well.  For starters, I eliminated the Death Knight class.  It seems cheating to be able to start at 55 when others would be at level 1.  Also, I was going to RP the toons but I don’t see that fairing well.  For starters, it will probably be hard enough for me to not get too connected with them, because any death is their end.  To add an RP element and a further extension of myself would make that harder.  I’d also spend more time trying to write about them than play them to be honest.

Having said all that, I’ve mapped out the first 12 characters (each race’s first go round).  This was done as random as can be.  Want proof?  I’m currently leveling two low-level Warriors.  I also like the Humans the least out of all the races.  First combo?  Yep. Human Warrior.  Whee.  I know you’re thinking I can just do something daft and get the toon offed and move on, but that would take the fun, and principle, out of the whole thing.  So, no, we’ll have none of that.

So, I guess this is it.  Launch time.  Our first character is off and running and up to level 4.  You can follow Golstaff either here when posts come about, or on the Galakrond(US) realm.

Today was one of those rare times where I didn’t really have anything ready for today’s post, and what I do have in the pipeline just isn’t to my liking (the editing process never ends), so I’m jumping the gun a little bit with an idea I have that will begin next week.  How far can I get without dying?

Between now and Tuesday I’ll create two guilds, one Alliance and one Horde with essentially the same name, or at the very least identical meaning.  I’ll keep a toon on the guild to keep it active when not being used.  On Tuesday, when Worgens and Goblins are introduced to the game I will choose a random race and class combo.  By random, I’ll use a d12 for race and then a die that best corresponds to the number of classes available to that race.   I will then see how far I can get without dying.

My characters will have one life.  I won’t cheat, and take on low-level quests and do simple things that will allow me to “beat the system.”  I will play the same way I always have, though obviously these toons won’t go into a battleground.  I will still do instances.  If we wipe, or I die in the instance, then I’ll finish the run obviously out of courtesy to the rest of my group, but then that character will be deleted and I’ll start new.  If by some fluke a toon gets to 85, I’ll retire them and start again.

The process for character selection will be to go with a different race each time, and ideally a different class each time.  With more races than classes, the latter will obviously repeat with more frequency than races.  I’ll continue to cycle through and keep a running tab on who gets how far and so forth.  If I really wanted to make this a challenge, I’d do it on a PvP server.  Alas, I’m afraid anyone who saw the associated guild tags that I have will just gun me down on first sight.

Instead I will be doing it on an RP server, though.  I’ll share my character names as they come to pass, so that you can cheer me on (or grief me) if your heart desires.  It’s something I have given an incredible amount of thought to (at one point I was also going to make them bounty hunters, but the mortality rate would be even skimpier) and am looking forward to it.  It won’t be my main focus, but will most assuredly be a nice way to switch things up now and then or take a break.