Skip to content
As I mentioned, dragonray had this week’s Shared Topic over at Blog Azeroth.

What is in game that you want, but you can’t have? Is there an animal you want to tame, a critter you want to collect, a tabard that has the perfect design for a transmog set etc etc.

What is it you want, but know you can’t get your hands on and have to stare at longingly whenever you log in?

I’d love to say I contemplated this for a lengthy period of time because I’m not greedy or anything like that and couldn’t decide.  However, it was actually a no-brainer.  Two things, and both are for Siori.  The first, is to continue the Fangs of the Father chain.  I still need to pickpocket Hagara and my schedule hasn’t allowed for that.  I love my rogue.  We now have a legendary that’s relatively easy to obtain and yet I can’t manage to make it happen.

The bigger one, I honestly believe doesn’t even exist on her server.  I think the programmer’s overlooked some weird glitch that removed it from the game.  I’ve spent nearly three full days in Deepholm and I have never seen Aeonaxx.  Haven’t even talked to someone who’s taken down the rare…or, again, even seen it.

Despite my clear-cut bitterness, I really enjoyed this topic.  It’s interesting to see what folks have on their mind when it comes to the idea.  Some are quite simple, some are much more elaborate or difficult.  Heck, I debated the idea of a harmonious player base, but I didn’t want to be completely unrealistic in my answer.

At Blog Azeroth this week, Cymre asked the question of what three items, for whatever reason fancies you, you would hate to lose on your main.  Now, as I don’t collect everything on one toon I’m going to cheat a little bit.  I’m simply going to share my top three items, period.

1. Liouxpold’s Frostsaber
I started doing the quests for this back when the rep was still absurd for the quests. Also before it was a daily. However, I will openly admit that once I found out the daily was coming I just waited and then did it that way. Recently, I paused to consider faction/realm transferring him until I realized I would lose the Frostsaber. As that immediately put an end to that idea, it made me realize how important the mount is to me. 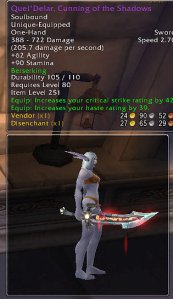 I maintain to this day everyone should try to snag a Battered Hilt and do the quest chain to obtain the weapon. It’s a great piece of Lore for certain.  From start to finish it is just an incredible chain of quests that sends you around Dalaran and Icecrown, as well as a phased version of the Sunwell Plateau ( which is one of the most beautiful raids in the game). I still have all of my screenshots from doing the chain and love to go back and look at them.  Not all of the “end-result” weapons look as nice as Cunning of the Shadows (made more badass by the Berseking Enchant), but as I say it’s worth having just to experience it all.  I would be incredibly disappointed to have that “undone” on me.

My only epic world drop in over six years. Back when Liouxpold was grinding Frostsaber rep this dropped off either a bear or Chimera. I was in awe, and as Cataclysm had been announced I had planned on making a Worgen Warrior. So I hung on to it until I had created Horrux and the rest is history.

I would be incredibly disappointed to lose any of these items and I’m sure I could think of one or two more. What brought up the question, was Cymre was recently hacked and so it had spurred the thought process while waiting for the items to return. I wrote a post earlier this year about not having been hacked myself and I would be frustrated if I was…to say nothing about how I’d feel if these three were gone.

You know, I was up half the night waiting for that and still didn’t see it until getting up this morning.  I can say with all honesty, I’m actually excited about the patch.  More importantly, the instances look exciting with their vast lore tie-in and the trailer only enhances that.  Matthew McCurley raised the Breakfast Topic of “What’s Your Most Anticipated Feature?”

I’ll admit the Raid Finder has such potential, but the Dungeon Finder is such a roullette table that I can’t imagine it being successful on a larger scale.  Perhaps I’ll be proven wrong and it will work out just the way Blizzard had in mind when they designed it.  But having said that, if you’ve been visiting the Amateur for any time at all you know what I’m giddy as a girl at a Bieber concert for:

Yes, Transmogrification is going to burn a hole in my coin purse as I get each toon set up with their first unique outfit.  Unfortunately, I only have three characters completed.  Part of that is due to procrastination on my own part, as I was working on other things and just never started designing the outfits in the first place.  The other factor is not getting certain gear to drop (curse you Curator!!!) or show up on the Auction House.  As you can see, though, Tumunzahar is ready to go.  He and Siori are already sitting outside the Transmog shop.

In the same building of course is the Void Storage and I honestly thought I would use that feature most thoroughly.  Going through my banks over the weekend, though, I don’t really have too much need for it.  Siori could be a candidate simply because she has a lot of gear.  We’ll see if the price holds up, as from what I saw on the PTR it’s a thousand gold for Storage use and then each item is 100g to deposit or withdraw.

This says nothing of the new instances, the legendary Rogue daggers, or Darkmoon Faire.  I know a lot of players have not been happy with this expansion, but I all signs today point to a home run in the bottom of the ninth for the developers.

We all have the same starting zones where we begin our various quests, but where does your character actually hail from?

When you play one character, it’s easy to say “I’m from such and such.”  When you play close to two dozen with something that resembles regularity, that’s a whole other story.  You start to think about each one and in some cases it’s easy and using any of them to answer the question seems like cheating (for instance, one character is in the guild <Proudhoof of Narache>).   So I looked at the character with the most play time instead, and that’s Siori. 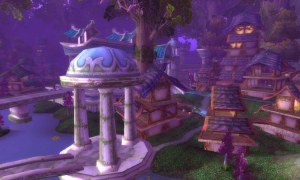 Sure, she’s obviously from the Darnassus/Teldrassil region, but always called Stormwind home.  Back when I was leveling her, your land mount came at 40 and I remember not getting one until 43 because it took her that long to get Exalted with the Humans (yes, I’m that particular).  Stormwind was her home, and I was quite fond of the Stockades/Enchanting Trainer district. 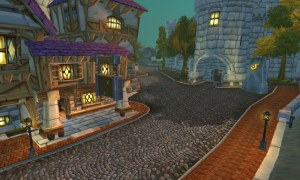 For many days Siori called the Molten Front home, doing her part on the front lines every day, and continues to do the things we heroes are known for.  Of course, that means very little in terms of resting.  But when the time comes for her to settle down for a bit, I think the Ledgerdemain Lounge might provide just what she needs. 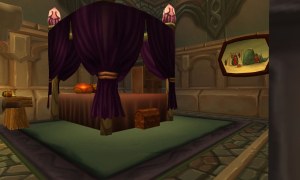 Originally today’s post was going to be a list of what I wanted to accomplish in the game before 2011 was up, but I decided to limit it to just this month instead.  I may do the same thing in December.  Getting Claws of Nature to level 8 was going to top the list, but we actually accomplished that yesterday morning (thank you Molten Front!). With such a small guild, I don’t foresee us hitting level 9 this month, but I won’t rule out doing so before the year is up.  So what do I think can be accomplished this month?

13 total items to work on, varying in difficulty.  I haven’t compiled a “to do” list in some time, so it’s hard to gauge whether this will be a moderate  list, or a relatively easy one.  What about you?   Is there anything you want to accomplish this month, or even before the year is out?

Sure, I could say in the two weeks that was, but I honestly hit a dry spell where my time in Azeroth was next to none.  The past week, however has been pretty kind to me. 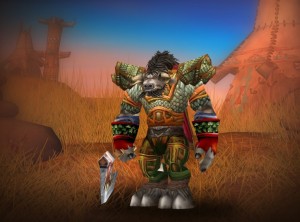 My Tauren Warrior Levache is now 22.  I’ve BG’d with him and I’ve run a couple of randoms with him and seem to be holding my own.  Sure, it’s early but I’m pulling aggro off the tank (Levache is Arms) simply because of numbers, and on a couple of occasions tanked when needed.  Still not sure about my confidence level doing so, but we’ll see how things go when my Tauradin starts to perform that role.  Saintvache has started seeing some play time as of late (only had the name reserved since Cataclysm launched).

Speaking of tanking…does this guy look like a tank to you?  Yes, that’s Logard.  Yes, he’s a Hunter.  Ran Scarlet Monastery’s Graveyard in what was just a weird run all around. I joined the group as it nearly wiped.  I say nearly because I went Cheetah aspect and booked it out in time.  We lose a dps, but since the place is green for the healer and myself we continue on.  The Paladin tank does fine, but moments before we enter the outdoor portion of the place…he says “someone else tank, I’m going to eat.”  Then he’s on follow.  Yes, this is where I’m impressed.  So a Priest and a Rogue are with me.  We decide I should tank.  That my pet is a Raptor means he isn’t holding much aggro, so it really falls on me.  Oddly enough, I did fine.  Only missed one mob.  Of course, we get to the room before the final boss and ye tank returns.  Interesting to say the least.

Finally did some more healing on my Shaman, Carrera.  My random ended up being Dire Maul and I immediately noticed the tank and I were grouped with three Gnomes from the same guild.  I wish I could remember the name of the Khaz’goroth guild, because these three were a piece of work.  Despite outnumbering us, a ninja vote went through to get one of them kicked.  Eventually, they were all replaced and the run went pretty well.  Carrera even got some solid upgrades.  I celebrated by maxing her Inscription at 300.  Engineering still needs work, but I bought her the Schematic: Lifelike Mechanical Toad, so I still felt pretty good about where she was at.

The only other toon to see some major play was Siori.  She’s a point shy of maximum Herbalism (stupid Twilight Highlands and all the Twilight Jasmine that requires 525).  Her Enchanting is nearly 500 as well.  But, the best thing of all was that she hit 85 yesterday.

I finished up Uldum on Saturday with the Harrison Jones chain (the keg sabotage quest creator can Die In A Fire), then got into some great quest hubs and stories in the Twilight Highlands.  The best of the bunch tells me the Drakkensryd was popular with more folk than just me as a quest that borrows heavily from the mechanic is in this zone. 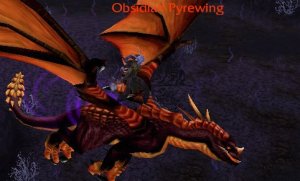 Needless to say, I loved it all over again.  I’d also like to give honorable mentions to the wedding and Iso’rath.